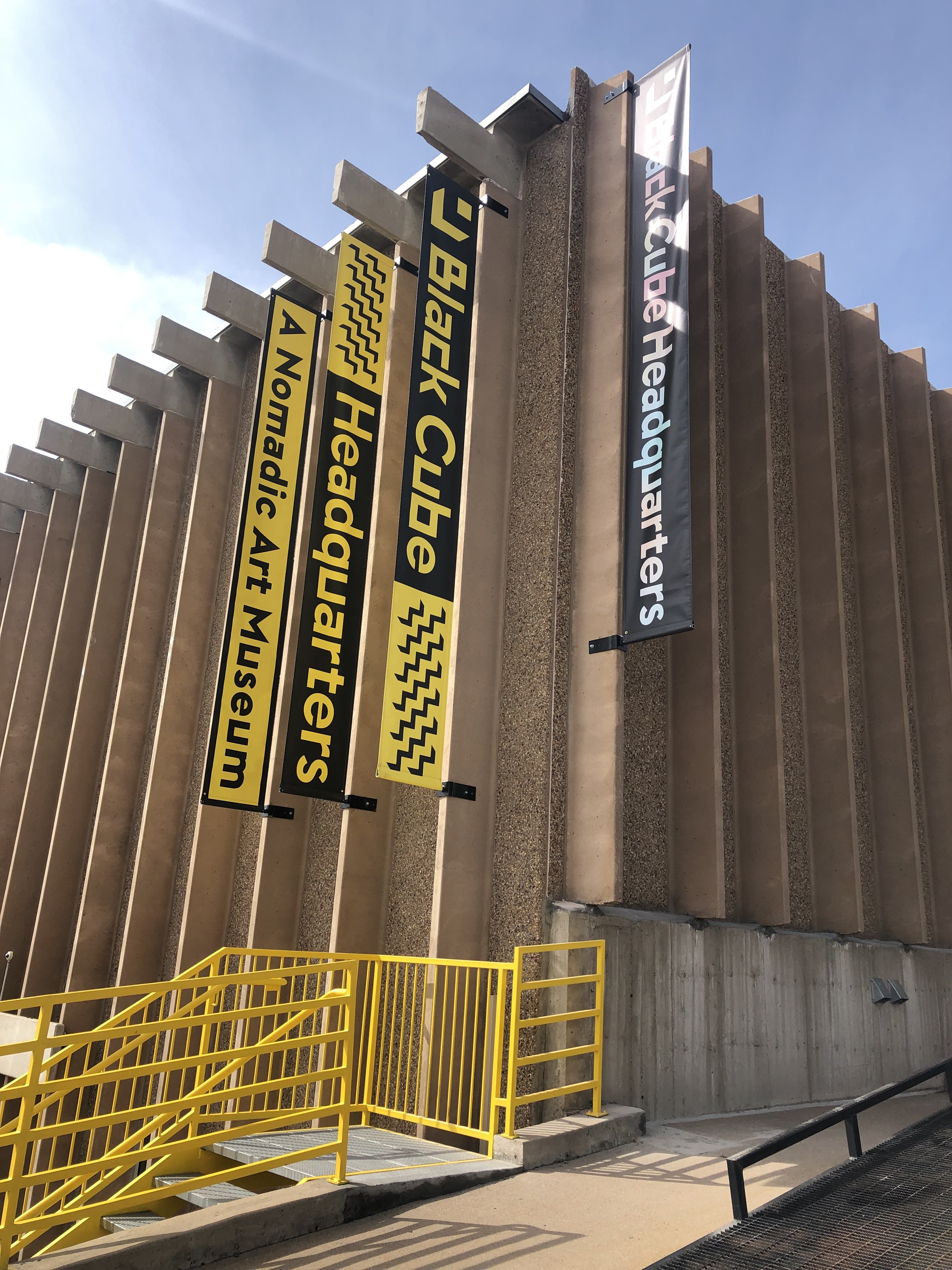 Art isn’t just relegated to museums and galleries. Art can come in many forms and even be viewed on the street, if you know where to look. The Black Cube nomadic museum seeks to bring contemporary art to the people by “diversifying the field,” according to Black Cube curator Cortney Lane Stell. This month in Englewood, it opened Black Cube Headquarters, which can function as exhibition space, a lecture hall, or an art fabrication place.

But what is Black Cube?

Black Cube is the reverse of a white cube. A white cube is the usual way art is displayed in galleries and museums, mainly with white walls and the art under a spotlight. Austere and distant, a white cube creates an effect where the art exists outside of context. The color white also creates a psychological effect of reverence, however the repetition of display has the tendency to numb the art experience. However, Black Cube inspires the opposite effect. Art is drawn into context by being placed out in the world as site-specific art pieces.

With locations in mind, art is created and chosen to interact with our environment, such as with one of the current pieces from the Monumental series, Monument for the 308, currently on exhibit at the Central Denver Public Library. A four-story sculpture of a skeletal 308 broiler chicken hangs above bookshelves and patrons. Just as the dinosaur was from an ancient geological era, this chicken bred by humans would be the fossil for the Anthropocene era. The library elevates the sculpture, surrounding it with books that record more of humanity’s impact on our world.

The other exhibit not inside the new headquarters is Share. Share is a series of bronze text sculptures that will be displayed throughout Denver using the same gold slab serif font that’s on Trump Tower. Anuar Maauad, a Mexico City-based artist, plans to display 100 of these sculptures spreading the uplifting message “To share is precious pure and fair” in contrast to the Trump Tower and all it represents, especially for the Mexican population. The message is a lyric from “I Want You” by Marvin Gaye, an American singer and songwriter. To share love and positivity, these sculptures are gifted to a variety of people and can be viewed by anyone for a year.

With the opening of the Black Cube Headquarters comes The Fulfillment Center. The theme for this indoor exhibition revolves around the idea of ecommerce and logistics surrounding the warehouse. Usually Black Cube doesn’t create exhibits around a theme, which makes the experience of the opening all that more special.

With art commissioned from 18 artists ranging from locals to national and international artists, each takes a different view of how consumers relate to the warehouse. Frequently they examine the human labor involved in the warehouse, but also how robotics and the digital economy affect international relationships. As the world becomes more immersed in ecommerce, our positions as consumers grow more and more distant from understanding the industry. The art invites us to contemplate the political, social, and geographic structures involving the warehouse and broaden the understanding of our world.

As I wandered into the Black Cube Headquarters, the first art piece I saw was a Japanese man in a suit sprawled on the ground, a robot sculpture called Miyata Jiro from the artist Momoyo Torimitsu. Along with it, there were six old VHS television sets, showing videos of people reacting to the robot crawling on the ground. It was off-putting, whether it was because of the uncanny valley or the message the robot and videos represent. However, I was reminded of something Cortney said to me: “Art isn’t about giving you an answer or telling you to think something. It’s about encouraging people to think on their own and reflect on the world around them.”

My exploration of The Fulfillment Center grew only more fascinating. In a way, the headquarters warehouse, with art pieces commenting on the warehouse, resembled Black Cube’s other exhibitions. Each art piece provoked thoughts, but I was particularly drawn to Sammy Seung-min Lee’s Changing Station. Red rails curve, an assembly line of infant clothes lay hardened and varnished with a mobile hanging over it. The red was quite beautiful, and the baby clothes were pale and crumpled. It was interesting to contemplate the relationship of how the assembly line and industry affect our intimate home actions, in this case changing a baby.

The most surprising art installation for me was Big Opening Event by Nina Sarnelle. In addition to assembling 500 Amazon boxes, Sarnelle created a 30-minute video essay. I started the video in the middle, where it was showing a Guinness World Record balloon launch in Cleveland. Nearly 1.5 million balloons drifted over the city and Lake Erie at the same time the Coast Guard was searching for missing fishermen. The Coast Guard’s mission was challenging: It was hard to spot a head or an orange life vest when there were hundreds of balloons covering the water.

Eventually, I finished looking at all the art pieces in the headquarters. I spotted the remains of a balloon drop as I left. I certainly had a lot to think about when I got home. Perhaps I would visit again to contemplate some more.

The Fulfillment Center will continue showing at the Black Cube Headquarters on Saturdays from noon to 4 p.m. or by appointment, until Dec. 7. You can find more information on all these exhibitions on the Black Cube website.