The River North Arts District has, to say the least, come a long way since its official birth 14 years ago. What started as a punkish, industrial hangout for starving artists has grown into one of the city’s most beloved ritzy-hip neighborhoods, filled with no-reservation restaurants, yoga studios, and real estate prices rivaling some of our swankiest outer suburbs.

But even after so much change, and with so much money pouring in, the abiding soul of RiNo remains in its public art. (It’s in the name, after all.) A stroll through the center of the neighborhood will take you past hundreds of murals brightening the walls of businesses, warehouses, and residences alike. For many of them, you can thank Robin Munro. He’s the man who founded Denver’s largest street art festival, Crush Walls, which has come to the neighborhood every fall for the last 10 years and has, in no small way, put Denver’s mania for public art on the map.

“In past years, you saw this trend where artists were leaving the city,” says Munro. “They were going to New York or L.A. or Chicago or other cities that were able to support what they were trying to do. Now I’m starting to see a huge influx of support from the city, from the local culture, from the community, to help elevate the scene and keep artists here.”

Painting streets is nothing new—the art world has always found a place for graffiti—but what’s happening in RiNo, according to Munro, represents a new and unexpected blending of traditions. “A lot of people who started out in graffiti are bridging back into fine art and street art, finding a way to make a living off of it,” he says. “And people with prominent education and backgrounds in fine art are branching into murals.” Ditto the blending of traditions across generational gaps. “So many younger, millennial-age artists are moving here. Whether because of the economy, the amazing weather, or the outdoor kind of life we have, there are multitudes of reasons pulling that demographic of people. That influx has definitely affected the scene.”

It’s all very exciting, but don’t take our word for it—see for yourself. Though the neighborhood stretches only about a mile from end to end, the nooks and crannies of RiNo are more densely decorated than you might assume, making a bike the best way to explore. You’ll be able to cover a lot of ground on a summer afternoon, even if you factor in time to stop off at breweries and coffee shops (of which there is no shortage; throw a stone and you’ll hit one) along the way. While you ride, keep an eye out for these popular pieces, which showcase some of the best artistry you’ll find. You may even discover a few hidden gems of your own. Happy hunting.

Artist Jason Thielke painted this 2015 piece, titled “Kim and Jesse,” using a large stencil broken into 4-by-4-foot sections. “I’m known for a line-art style,” says Thielke, who is currently at work on a series of cityscape collages that borrow loosely from the conventions of architectural drawing. A street artist since 2006, Thielke also works on wood panels using acrylic paint, spray paint, pencil, and mixed media. He shows his work at the David B. Smith Gallery on Wazee St. Instagram: @jason_thielke

Two Halves of a Whole 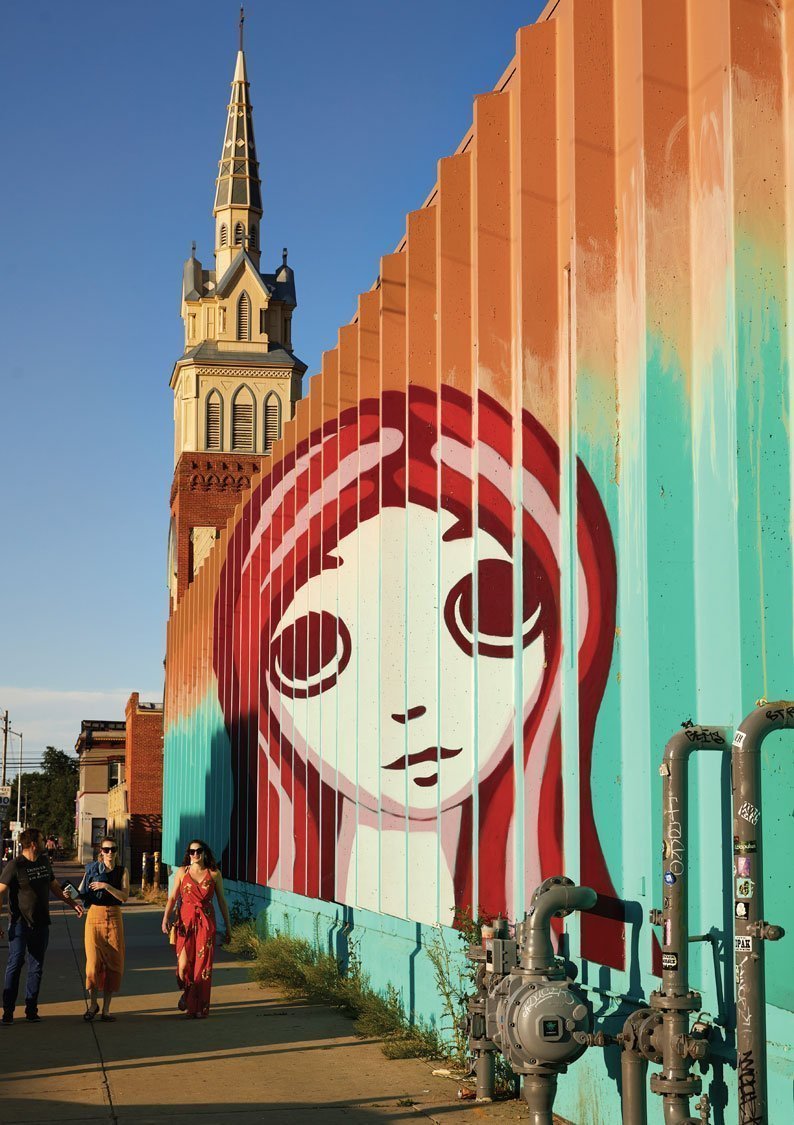 Colorado native Jeremy Burns painted one of RiNo’s most recognizable murals, “Larimer Boy and Girl,” in 2015, after a motorcycle accident prompted him to explore street art. “I was doing studio work for a number of years,” says Burns. “In 2013, I was in a bad wreck and pretty much destroyed my right shoulder and elbow. One of the things I lost for a while was fine motor movement. I had a friend who suggested I start painting bigger.” The idea to create a mural that looks different depending on the viewer’s vantage came to him while driving past the concrete fins on the southwestern wall of the Pepsi bottling plant on 38th St. (where he now has another piece).

To trace the outlines for “Larimer Boy and Girl,” he parked his car in the middle of the street at 2 a.m. and set up a projector on top of it. “There were lots of tricky things,” he says. “If the projector moves while you’re up there on the wall, it’s a big problem. One night my girlfriend helped me. She fell asleep in the car while I was projecting, and when she woke up, the weight of her body shifted and the projector raised up about three inches. She had to go back and lie in the same spot. When she did, the image fell right to where it needed to be. There was also an incident with a drunk guy who saw the extension cord running across the street and started jerking on it. Luckily, I had the cord tied to my car before it went up to the projector, or else he would’ve jerked the projector right off the car.” Instagram: @jaysaybay

Portland-based artist Blaine Fontana collaborated with the owners of Ratio Beerworks on this piece, titled “Crush on Ratio,” which covers roughly 1,700 square feet of the brewery’s patio wall. “I got a lot of inspiration from beer,” says Fontana. “The owners were able to provide so much rich history and texture. A portion shows Louis Pasteur, the French inventor who gave us pasteurization.” The proportions of the golden ratio (which inspired the brewery’s name) also dictated many elements of the work. Instagram: @blainefontana

This colorful triptych (southernmost panel shown here) by Pueblo-born artist Michael Ortiz, titled “Mind, Body, Spirit,” was conceived for RiNo’s 2016 Crush Walls street art festival. Ortiz has lived in Denver for 20 years, though his art has taken him all over the world. “My company, Like Minded Productions, has done stuff in London, Jamaica, all around the U.S.,” he says. In Denver, you can see more of Ortiz’s work on the southwestern wall of the NATIV Hotel and the northwestern wall of the Denver Center for the Performing Arts’ parking garage. Instagram: @illson

The So-Gnar Creative Division, an organization focused on public art and collaborative events in Denver, is responsible for the well-known (and oft-Instagrammed) “Love this City” murals throughout the metropolitan area. Together with fellow artists Remington Robinson, Jason Graves, and Pat McKinney, former pro snowboarder Pat Milbery, who founded So-Gnar, uses “Love this City” to promote respect for Denver through good times and bad. “Loving is not the easiest thing to do,” says Milbery. “But it creates a lot of dimension in your heart.” Instagram: @so_gnarcreativedivision

This widely known Denver-born artist, who goes by the name Gamma Gallery, has been putting up hyper-realistic murals around the city for 11 years, working only with spray paint (never brushes) and no stencils. “I don’t really even sketch,” he says. “Any ideas that I come up with, they’re either out in public or they don’t exist except in my head.” This piece, titled “Skin Condition,” superimposes a map of the continents on a woman’s face. “There’s a lot of different meanings,” says Gamma. “It’s addressing skin color, but also more locally the gentrification controversy” in the Five Points area. His best advice for new artists? “Stop doing stuff for free. There’s too many artists in Denver that get talked into doing artwork for exposure, and that undermines the whole scene.”
Instagram: @gammagallery

Artist Lauren Napolitano painted this untitled piece on Bar Fausto when she passed through Denver a few years ago, collaborating with her friend Mark Pricks, who designed the shape of the snake. “My art is very rooted in folk motifs,” Napolitano says. “My mother is from Mexico, and I’m definitely influenced by that work.” Though Napolitano doesn’t officially live anywhere—she travels full-time, jumping from project to project—she returns to Denver often. “There’s a lot of opportunity here,” she says. “I find myself passing through a lot.” Instagram: @peptalks

Showcasing the artist’s self-described style—“whimsical with a dash of street”—Aspen native Axel Geittmann painted this untitled piece for RiNo’s Crush Walls street art festival in 2016. “I prefer to work with paintbrushes,” says Geittmann, “but the texture on the wall wasn’t conducive to brush technique, so I broke out the spray cans. It’s a totally different flow with how you paint. It’s a lot faster.” Geittmann has murals at the Stanley Marketplace, Bar Max on Colfax, and Bellweather café in South Park Hill.
Instagram: @leadpaintpopsicles

Check out the second half of our love letter to Denver’s street art here, as we follow a father-son team of muralists who painted a 65-by-65-foot mural on a parking garage downtown.